St Leonard’s Catholic School was founded by the Catholic Church to provide education for children of Catholic families. The school is conducted by its governing body as part of the Catholic Church in accordance with its trust deed and instrument of government and seeks at all times to be a witness to Jesus Christ. Whenever there are more applications than places available, priority will be given to Catholic children in accordance with the oversubscription criteria listed below.

The admission policy criteria will be dealt with on an equal preference basis.

The consultation will run from 5 December 2022 to 27 January 2023. A consultation response form is available by request from the school. If you wish to receive a copy of this, please contact the school using the General Enquiries form on the website.

The local governing committee (on behalf of the admissions authority) will consider all comments received before they determine the arrangements for 2024-25.

The governing body has set its admission number at 232 pupils to year seven in the school year which begins in September 2023.

Children with an Education, Health and Care plan or a statement of Special Educational Need

Children who have an Education, Health and Care (EHC) plan or a statement of Special Educational Need where the school is named as the most appropriate educational setting for the child will be admitted.

If the parent is required to provide supplemental evidence to support the application (e.g. a baptismal certificate), this evidence should be provided at the time of application. If not provided, evidence may be sought by the governing body following the closing date for applications. This information must have been correct at the date of closing for applications.

All applications will be considered at the same time and after the closing date for admissions which is 31 October 2022.

Late applications will be administered in accordance with the local authority coordinated admissions scheme. Parents are encouraged to ensure that their application is received on time.

Admission of Children outside their Normal Age Group

A request may be made for a child to be admitted outside of their normal age group, for example, if the child is gifted and talented or has experienced problems such as ill health.

In addition to their right of appeal, applicants will be offered the opportunity to be placed on a waiting list. This waiting list will be maintained in order of the oversubscription criteria set out below and not in the order in which applications are received or added to the list. Waiting lists for admission will operate throughout the school year. The waiting list will be
held open until the last day of the summer term. Inclusion on the school’s waiting list does not mean that a place will eventually become available.

An application can be made for a place for a child at any time outside the admission round and the child will be admitted where there are available places. Applications should be made to the school by contacting Head Teacher at St Leonard’s Catholic School, North End, Durham, DH1 4NG. Parents will be advised of the outcome of their application in writing.

Where there are places available but more applications than places, the published oversubscription criteria will be applied.

If there are no places available, a request can be made that the child is added to the waiting list (see above).

Where a parent has been notified that a place is not available for a child, every effort will be made by the local authority to help the parent to find a place in a suitable alternative school. Parents who are refused a place have a statutory right of appeal. Further details of the appeals process are available by writing to the chair of governors at the school address.

The school is committed to taking its fair share of children who are vulnerable and/or hard to place, as set out in locally agreed protocols. Accordingly, outside the normal admission round the governing body is empowered to give absolute priority to a child where admission is requested under any local protocol that has been agreed by both the diocese and the governing body for the current school year. The governing body has this power, even when admitting the child would mean exceeding the published admission number.

The governing body reserves the right to withdraw the offer of a place where false evidence is received.

Where there are more applications for places than the number of places available, places will be offered according to the following order of priority.

First priority in categories 1 to 5 will be given to children who will have an older sibling attending the school in September 2023.

Where there are places available for some, but not all applicants within a particular criterion priority will be given to children living closest to the school determined by the shortest distance. In assessing home to school distance the LA uses a Geographic Information System (GIS) to identify and measure the shortest route utilising only the Ordnance Survey Integrated Transport Network (ITN) and Urban Paths Network (UPN) which are national recognised datasets. The LA will not include any other routes or any other method of measurement. Routes are measured from the centre point* of the child’s house, or in the case of a flat from the centre point* of the building, to the nearest school site entrance. In all cases the GIS identifies the route to be measured by connecting in a straight line the centre point* of the child’s house to the closest point on the nearest route on the ITN/UPN.

* In accordance with the co-ordinates of the Basic Land and Property Unit on the National Land and Property Gazetteer.
In the event of distances being the same for two or more children where this would determine the last place to be allocated, random allocation will be carried out in a public place and supervised by a person independent of the school.

If, as a parent / carer of a pupil attending this school, you require a paper copy of the information on this website, we shall provide this free of charge. 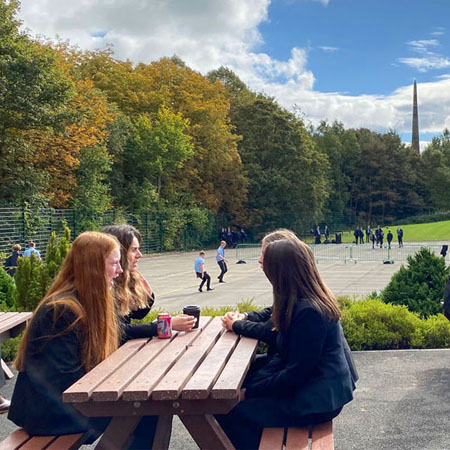